Letting all your babies live and shit!

I was working on crunching some numbers for my special video dedication to that Douche Bag, Elizabeth Cohen at CNN, when a little something caught my eye.

I was specifically looking at infant mortality rates because of something she tossed out to dazzle us.  Her reason WHY vaccines are so great –she called this number “stunning”. Vaccines are a “HUGE reason” for this. HUGE she said, with emphasis!

I was poking around the Google and found this study which shows the relationship between infant mortality and the number of vaccines that kids get before age one, by country.

Then I started to poke around in the various countries themselves, through the tubes of the interwebs and UP POPS this headline: 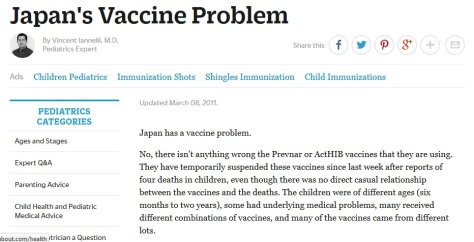 Those fuckers! (by the way, when Autism rates were 1 in 150 here in the USA, they were 1 in 475 in Japan –ours being 3.2 times worse than theirs*)
ok…. SO…. What is Japan’s Infant mortality rate, considering how careless they are with their vaccine recommendations?
2.17 per 1000.
Ranked #2 for allowing their babies to live.

Yeah. What a fucking problem.
OK, sure… I know what you are thinking….
Their kids probably die in Kindergarten from Chicken Pox!
Japan life expectancy 81.25 years
USA 78.74.

Try again. Japan doesn’t have a problem. The vaccine manufacturers have a profit problem.

Oh and, we have more babies die in the first 24 hours than any other industrialized nation. Couldn’t possibly be the flu shots full of mercury that mom got while pregnant and the Hep B on the first day of little Johnny’s life. Nah. I am sure that is a coincidence. It’s ALL a coincidence.

After all… say it with me now, “Vaccines are the leading cause of coincidence in this country!”

[*The other countries who do a great job at allowing their babies to live, give the same amount of vaccines as Japan, but had even BETTER autism rates. Our kids had anywhere from a 5.7 to 14.6 higher chance of getting autism than in Nordic countries. I can speculate as to why Japan’s autism rate is not as good as theirs –it would involve the legacy of Minamata, mercury contamination in fish, etc.]

[Editing to add some info my friend, David Anderson, posted on Facebook this morning:

Only 30%-40% of Somalian children are vaccinated against 6 childhood diseases. They have no word for Autism. If Somalian parents have a baby in the US (large refugee population in Minneapolis), 1 in 32 of them have Autism.
http://www.nytimes.com/2013/12/17/health/study-links-autism-and-somalis-in-minneapolis.html

Being black may make you more susceptible to vaccine-induced autism. Ugandan refugees’ babies born in Sweden have 200 times the rate of autism that Swedes do. (http://www.ncbi.nlm.nih.gov/pubmed/7787384)

Sweden gives 15 vaccinations before the age of six. Their autism rate is 1 in 125.
http://www.euvac.net/graphics/euvac/vaccination/sweden.html
http://www.ncbi.nlm.nih.gov/pubmed/22048962

The “Danish Study” establishing no-link between Autism and Vaccines conducted by Danish national Poul Thorsen and his MMR safety study are the reason you think vaccines don’t cause autism. He was indicted by a federal judge in Atlanta 3 years ago for fraud: he embezzled $2M of CDC funds that were supposed to fund his research. He remains at large.
(http://oig.hhs.gov/fraud/fugitives/profiles.asp) <—scroll down

And, if you did your own homework, you would see that the rising rates of Autism for the past THIRTY years are in lock step with increases to our own vaccine schedule.”]

Listen, all y’all! It’s a Sabotage!

7 thoughts on “Oh, Japan! What are you thinking!”